What is “bumf”? It’s where I store all the little trivial tidbits of info that fascinate me. They might interest you, too! By the way, I didn’t make this up. Blame the Brits! “Bumf” is an abbreviation for the slang term, “bum fodder.”

Lubricating the chain: “Obtain some mutton fat and melt it down, pouring off the liquid fat. Clean your chain thoroughly in kerosene and let it dry before immersing it in the molten fat. Wait until the fat cools down enough so a film starts to form on top before pulling the chain out and quickly wiping it down. Mutton fat will act as a lubricant, while also having a much greater resistance to water than grease or oil. As such, it also makes an excellent saddle dressing and is used fairly commonly to soften and preserve leather racing saddles in France.” John Allis in a 1966 letter to American Cycling.

“I get so demoralized going to my local dealer now. It’s in this huge building and totally branded by one company; it’s ridiculous. With the one-size-fits-all sizing, internet coaching and corporate branding, the whole experience has become so soulless; it’s like golf!” Nick Frey of Boo Bicycles quoted in the November, 2012 issue of Road Bike Action.

Roger Hammond, well-known British cyclist, has retired to manage an Under-23 road team. Their ride? Genesis, a UK brand. These bikes will be made from Reynolds 953 stainless steel. As the press release says about the bikes, “…[they are] capable of being a credible contender in any race.”

The marketers say 700c is the perfect size for all road riders but mountain bikers need 26″, 650B and 29-ers. I think I know hype when I see it…

Cycling Weekly reports on Cav’s Pinarello Dogma 2. Talk about padding the cockpit: the Manx Missile has double layers of tape on the top of the bars as well as double brake hoods. Comfort is cool!

Worth the read: Merckx: Half Man, Half Bike by William Fotheringham. Merckx didn’t just win everything under the sun, he won ruthlessly.

Who’s riding what at the Tour de France? Shimano leads the way — 13 teams are using the group and 7 of the 13 are on Di2. Next up is SRAM, with 5 teams choosing the Chicago-designed group. Bringing up the rear is Campagnolo: 2 electronic groups, 1 manual and 1 “hybrid”.

The June 7 issue of Cycling Weekly has an article about the effect of the Q-factor on a cyclist. The Q-factor refers to distance between the crankarms, measured where the pedals join the crankarms. If this is too wide, the mechanical efficiency of the rider can decrease. Widths of 150mm and more seemed to be the tipping point. Unfortunately, the magazine did not cite its source….

If “trickle down” technology is for real, then Shimano’s new Dura Ace 9000 group is good news. Apparently the shifters require less power and have less stroke. Great news for those with smaller hands. Hopefully this will find its way into all of Shimano’s road groups.

If you were riding the Tour de France in the mid-50’s and your soigneur handed you a musette in the feed zone, it would probably contain a quarter of a chicken, 10 sugar cubes and 10 prunes. My, how things have changed!

New research has shown that a 2:1 mix of glucose or maltodextrin to fructose gives you the ability to absorb more carbs. Apparently these ingredients use unique pathways to ultimately get into the bloodstream.

Cycling Weekly includes the Trek Project One Madone 6.9 SSL WSD as one of the hottest bikes displayed at their Sandown Road Cycling Show. Their comment, “This one’s a women’s specific design, but we love that most people won’t know.” ?????? 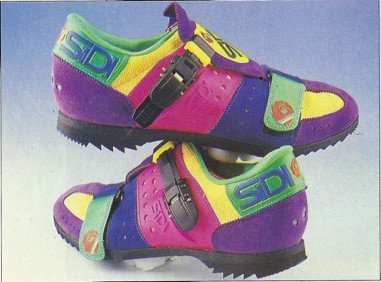 Sidi shoes always seem to be at the cutting edge of fashion and function. If you’d like a pair of these, plan on going back in time: this “Challenge” mountain bike shoe was introduced in 1991. Designed with an upper that was resistant to stretching, cracking and decaying, you may still find a pair on eBay!

Jan Heine of Bicycle Quarterly explores the concept that steel frames go soft as they age: “Frames “going soft” appear to have been mostly a British and American phenomenon (the two cycling cultures have been closely linked for decades). In France, frames apparently do not “go soft,” but instead are considered essentially eternal.” Read more on his site.

Jan Vanpraet, an engineer with Eddy Merckx Cycles defends the “heavy” 15.4 pound EMX-5 model: “We will not sacrifice ride quality or durability in order to play the weight game. There are things more important to us than just weight…”

Great line from a recent Campagnolo ad: “I spent half my life riding bikes. The other half I wasted.”

New products that intrigue me: www.skratchlabs.com, Allen Lim’s brainchild. Actually, anything Allen Lim does intrigues me…