Whenever I read about steel bicycles, they always seems to be mentioned in the context of a “retro” bike or that second bike that one turns to for a truly comfortable ride that’s not all about “lighter, stiffer, faster”. Too bad, because steel’s a great choice for the serious cyclist — light, fast and comfortable as well as safe and durable. Contrary to popular opinion, steel is still an “edgy” material. But that’s not always apparent.

Maybe it’s because of the diamond frame. It’s changed little over the years simply because the diamond structure is the strongest for a bike constructed of tubes. Tube diameters have increased and tubes that were once round may now be oval or tapered. But the frame is still a diamond.

We’re a society that always wants new and better. No wonder carbon fiber bikes are so popular. The material lends itself well to a variety of shapes as well as offering extraordinary stiffness to weight and strength to weight properties. Carbon bikes always seem to be visually evolving, one-upping each other and offering the cyclist a lot of aesthetic choices.

That’s not to say choices aren’t available with steel. When a customer buys a Terry, we can paint it any color she can imagine. We can also customize components and even the frame geometry itself to accommodate a rider’s needs. I appreciate the ability to tweak a frame design for the female rider. It’s very easy and relatively inexpensive to do this with steel. Would a longer or shorter top tube suit the rider? How about a slacker seat angle? More drop? Less rake? There’s virtually no part of the frame that can’t be changed as easily in production as it can be on the frame drawing.

Because of that persistent diamond frame, you might not have noticed, but there’s been a huge improvement in steel. Tube sets are lighter now than when I began designing and building women’s bicycle frames twenty five years ago and they are stronger as well. True Temper® OX Platinum™ is a perfect example. It’s an air hardening steel that actually becomes stronger as it cools after welding. It also resists annealing, or “weakening” during welding. That means thinner, lighter tubes can be used without sacrificing strength. There’s no doubt that carbon fiber frames can be made lighter than steel, but steel is now quite competitive given technological advances.

As consumers, we have an understandable tendency to equate “light” with carbon and “heavy” with steel. A bicycle dealer friend of mine is fond of asking his customers to lift a very nice steel bicycle to test its weight. He tells some the bike is carbon fiber and others it’s steel. Those who are told the bike is carbon fiber respond with, “Wow, it’s light.” Those who are told it’s steel say, “Hmm, heavy.” Ah, the power of the mind!

Any mention of ride quality is by nature very subjective, but there is one time when the rider of an ultra-lightweight bike may feel at a disadvantage: descending hills. If the ride down leaves you white-knuckled it will definitely distract from the joy you had while riding up!

No discussion about steel is complete without a nod to its durability. Because it’s(metallurgically speaking) a tough and ductile material, it typically dents or bends after an accident. By contrast, a carbon fiber bike may not show evidence of damage. But if enough stress is accumulated, the frame can fail without warning. I find it comforting to know that steel “tells me what it’s thinking” in this respect. If the frame has been damaged, I can see it. There’s no concern about hidden damage that might unexpectedly compromise my safety. Obviously, designers of carbon fiber frames are well aware of this and design conservatively to make sure this won’t happen as they try to make their bicycles lighter.

What about the “green” value of steel? Ride magazine recently calculated the cost to the planet of manufacturing bikes. Steel was the least expensive (42 kg), about half the cost of making a carbon fiber frame (114 kg). This study took into account the amount of greenhouse gases used to produce the bike — from extraction to refinement to production.

When you compare the cost of a unique, hand built steel bicycle to a “ready to ride” bicycle comparably equipped, a hand built bike is very competitive. And isn’t this the ultimate goal of every rider – a responsive, light, dependable and lively ride on a bike that’s truly an investment?

Many thanks to Graeme Horwood, Engineering Consultant with True Temper Sports, for his help with this article. 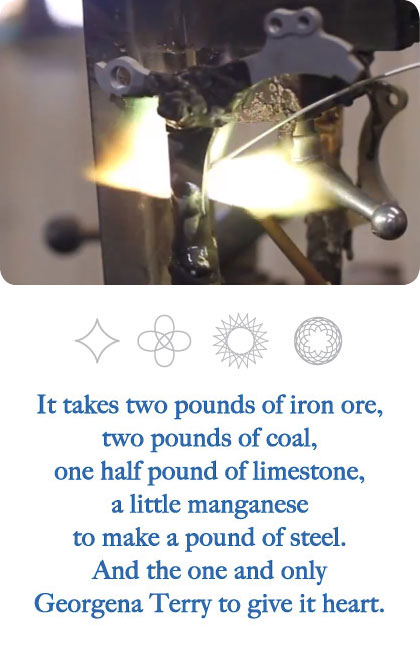