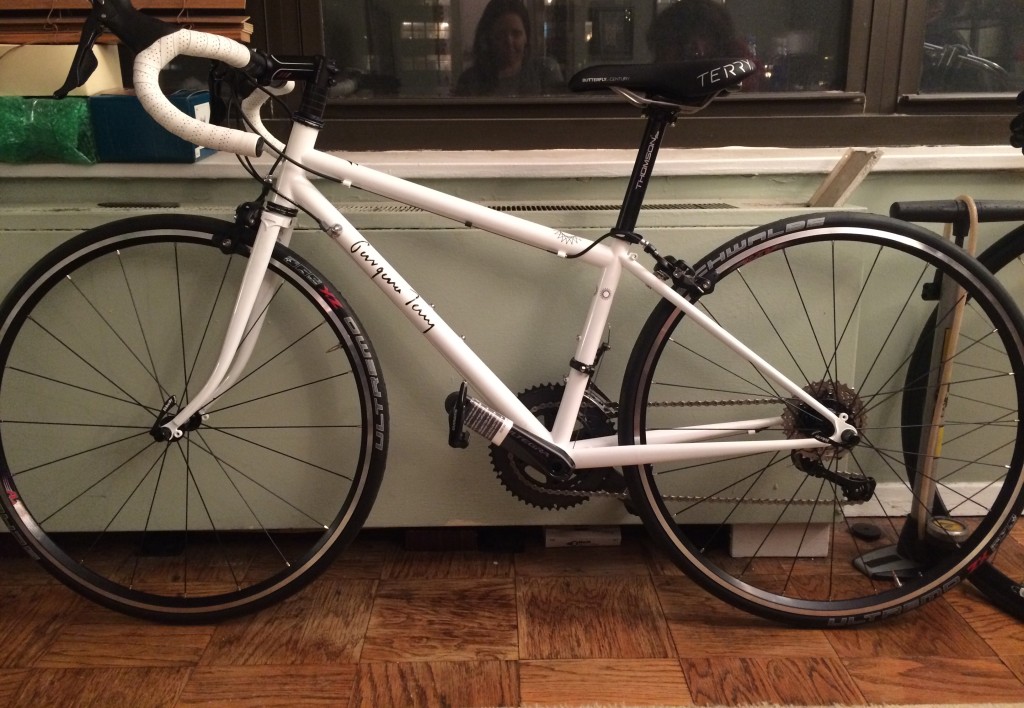 A few weeks ago, a friend dumped a pile of old cycling magazines on my doorstep. Two articles I read about 650 wheels were quite fascinating and I think provide some insight into our perception of 650 today.

When they debuted in 1989, 650c wheels were “the toast of triathlon” according to Dan Empfield. Even today, the tire is true to its heritage, predominantly available in narrow widths in more upscale brands as befits its role as a competitive tire.

Around the same time, Schwinn started playing around with a 26 inch wheel version of the Paramount, its hand-built top of the line road bike. Oddly, the Paramount designers used the 650B tubular tire. (The 650B clincher is a wide tire, associated with randonneur bikes, the polar opposite of the Paramount.) It’s not clear why Schwinn didn’t spec the 650c tire. Perhaps they felt the slightly larger (13 mm) diameter 650B had less of a visual shock…

What piqued Schwinn’s interest? The lower mass of the 650 wheel which makes it easier to accelerate than a heavier wheel. While today we usually associate 650 as a wheel used on a smaller bike to achieve a good fit for the rider, Schwinn’s designers didn’t seem at all driven in that direction. Indeed, when Bicycle Guide reviewed the Paramount OS-26, Schwinn provided the test bike in a whopping 61 cm size! The smallest available size was a 51 cm. Two of the bike’s reviewers mentioned that perhaps the 650 wheel would be best put to use on a smaller frame where it would be more proportionate to the bike size.

By 1993, the wind had started to go out of the 650c wheel with respect to tri bikes. Changes in rules and technology meant 700c could do the job just as well. But it would be remiss to say that because 650c is not the player it once was in tri bikes that the same is true for road bikes. We use 650c in road bikes to create a frame geometry that offers an elegant solution for smaller riders. In the tri world, 650c wasn’t about bike sizes — it was about weight distribution and a low tuck position on the bike.

In January, 1994, Road Bike Action reviewed a Radman D/650 road bike. Radman was known as a builder of tri bikes and began moving into the road bike market to compensate for declining tri bike sales. As with the Paramount OS-26, the lure of 650c was the light weight wheel which accelerated easily. The size of the test bike? 58 cm! The review concentrated on the “rush” of the bike’s acceleration. But a caption under a photo of the bike mentioned that 650c would allow an optimal geometry for frames under 50 cm.

Fortunately, someone was reading the small print and 650 soon became popular on many small bikes. I find the 650 size to be an excellent “bridge” between my 24″/700c and 700c/700c bikes. While rules and components may have allowed the 650c wheel to become “redundant” for most tri bikes, these changes have not affected the road bike world. 650c is still a key player in the world of bike design.

The 90’s Paramount lineup included bikes spec’d for 650c, not 650b as you note (I think the only time Schwinn used 650B was for a couple mountain bikes in the 80’s, including the Mirada).

I have several bikes but the OS26 is one of my favorites to ride. Schwinn used a 56T sprocket on the front to offset the smaller wheel diameter and as a result the bike is very quick and a great hill climber.

Interesting — I asked Marc Muller about this and he swears they were 650b….

Don’t know why Paramount insisted on using the 26″ wheel moniker, that was confusing (26″ usually means the MTB 559mm BSD size, i.e. different from the 650C Paramount was actually using).

Visually, I think they would’ve indeed been better off had they gone with 650B instead, the small 650C were a bit of a visual shock on ‘normal-sized’ bikes, much less say a 61cm frame size.