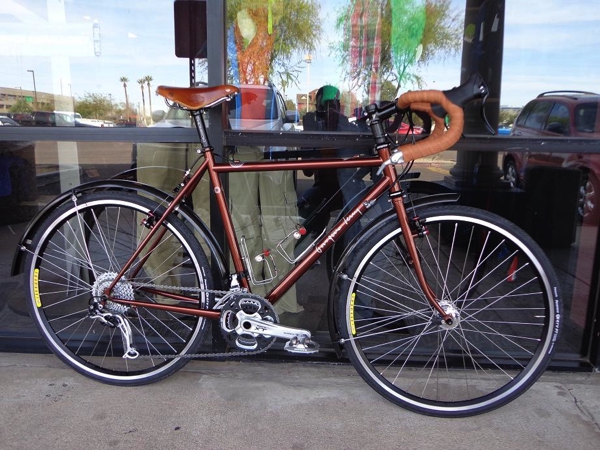 When you purchase a Georgena Terry bicycle, it doesn’t arrive on your doorstep in a box. Nope. I send it to a dealer and pay to have it not only assembled, but fit to you as well. I’ve had a lot of experience fitting women through emails and phone calls, but I still want a professional to put the bike together and tweak it for the final fit. Whenever I talk to a customer about bike shops and she mentions REI, I know the bike is going to a good home.

My most recent bike, a nifty custom conglomerate of Coto Doñana Tour (most of the components), Coto Doñana Vagabond (the frame and fork) and (the still in its prototype stages) American Dipper, landed at REI in Tempe under the watchful eye and skilled hands of Master Technician Tyler Schettler. 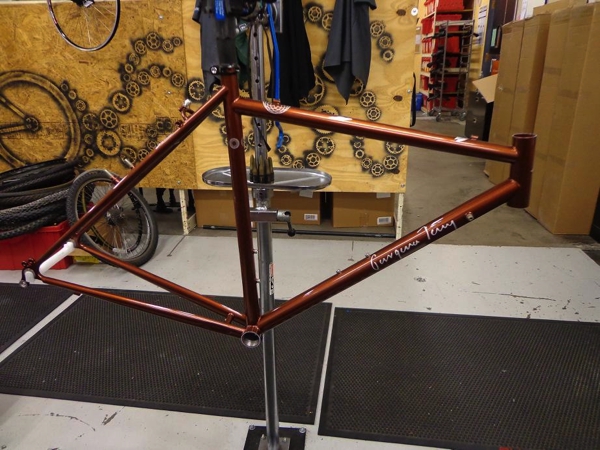 How nice it is to work with a dealer who appreciates the bike and respects the customer. Tyler kept me and the bike owner in the loop throughout the building process. I felt like I was in the shop! Kudos to REI for setting the standard. 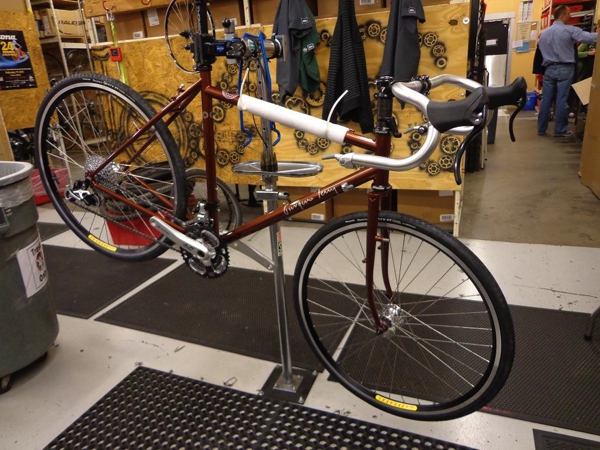 You probably want to know more about this bike. Its rider will be doing loaded touring on paved and dirt roads. She’s the average American woman height-wise, but much more slender. She knows a lot about her riding style and her preferences in bicycle components. As a result, her bike is made from the slightly lighter tubing used on CD Vagabond, but with the touring components of CD Tour. The wheels are all-American: Phil Wood 36 hole touring hubs with Velocity’s Aeroheat rims (now made in Florida). The saddle is the tried and true Brooks Team Pro. (Steel frame and fork plus Brooks saddle — these will last for decades with care.) The package is topped off in Iron Ore metallic, a custom color.

I’m looking forward to working with my next customer and hoping an REI is her town, too.

I was happy to read what you thought of REI. I have always loved them for hiking, cross country ski equipment ,etc. I didn’t know if they really know bikes. Now I do.